The underlying hypothesis of the tool is that resources that are brought into a fragile or conflictual context often end up exacerbating existing tensions and can even provide the trigger that reignites open conflict and violence.

In all contexts development resources shift power and in so doing affect existing forms of structural control, influence and change systems and affect the people involved. If the introduction of new resources is not carefully considered they will inevitably initiate unforeseen consequences that may undermine the stated values and intentions of the implementing groups.

These same resources can however also be used to foster connections between people, and can be used to respond to the short term needs in a manner that also rebuilds the longer term social fabric needs of a society.

The tool provides a useful framework for linking development and humanitarian efforts to a conflict response that shifts thinking beyond the resolution of a conflict to a deeper understanding of the underlying contextual dynamics.

This understanding is well articulated by practitioner scholars like John Paul Lederach and Chris Mitchell.

Lederach proposes that the concept of conflict transformation responds more effectively to the dynamic nature that social scientists such as Coleman (1956) and Boulding (1962) have suggested is an important part of understanding social conflict.

Lederach places these interconnections between systems and relationships at the core of his contribution. Using a model of nested paradigms that draw from the work of Marie Dugan and other writers Lederach (1997:80) provides an integrated framework for understanding conflict and building peace that links the immediate issues that manifest as crisis or visible conflict with the latent, deeper conflicts that lie within the relationships, subsystems and overarching systemic frameworks that form part of the context. This set of ‘nested paradigms’ is reflected in the tool.

In further explaining his preference for taking an engagement with conflict beyond resolution Lederach (1995b: 201) argues that the concept of conflict resolution “perhaps unintentionally … carries the connotation of a bias toward ‘ending’ a given crisis or at least its outward expression, without being sufficiently concerned with the deeper structural, cultural, and long-term relational aspects of conflict”.

In an interesting analysis of the two concepts of resolution and transformation Chris Mitchell (2002:19), who acknowledges that his initial position was skeptical of any major differences, recognises in his conclusion that there is at least one significant difference that goes beyond emphasis in approach. As Mitchell points out conflict transformation assumes that structural change will necessarily form part of the conditions by which an effective outcome to a given conflict will be found.

Furthermore Mitchell (2002:20) argues that conflict transformation recognises that the processes of rebuilding relationships will not automatically take place once the immediate crisis surrounding a conflict is diffused, relationships have to be deliberately rebuilt through directed effort. Mitchell recognises the interdependence of these levels of change and concludes that without both of these aspects either one is unlikely to head off future tensions and the return of conflict and crisis.

Lederach suggests we need to work together to create an integrated framework: “Structure suggests the need to think comprehensively about the affected population and systematically about the issues. Process underscores the necessity of thinking creatively about the progression of conflict and the sustainability of its transformation by linking roles, functions, and activities in an integrated manner.” (Lederach, 1997:79)

Lederach (1997:82) takes his model of nested paradigms further in explaining that the concept of conflict transformation refers to change that works at both a descriptive and a prescriptive level. Descriptively it refers to the effects that social conflict brings about. Prescriptively it refers to the deliberate interventions that are made in response to conflict, in an effort to direct the dynamics of conflict in a particular direction. The Conflict Sensitivity Framework provides ways of understanding how humanitarian and development resources can be consciously used to impact deliberately on conflict dynamics in support of this conflict transformation approach.

The Framework also resonates well with the “Do No Harm” approach to development associated with Mary B. Andersen and builds on the analytical tools outlined in the “Working with Conflict – Skills and Strategies for Action” co-authored by Fisher et al.

Do No Harm introduces a set of connector and divider lenses through which to view the context into which resources are being introduced. Working With Conflict provides an additional range of analytical tools. These tools would form part of the foundation on which the Integrated Framework is built. A thorough analysis of the context, that recognises the dynamic nature of conflict, is an essential starting point for any work in a conflict context.

Where the framework goes further is by providing a way of linking short term to longer term interventions, in recognising that even a short term activity has longer term implications, and in emphasizing the need for a self reflective approach that recognises the impact of the individual, agency or organisation on the context in which it is working.

A graphic representation of a conflict systems response to crisis and post-crisis contexts:

By providing a model of this understanding relief, development and peace practitioners have a graphic that can serve as a practical planning and monitoring tool that assists in finding the complementarity in their approaches, unified by a shared vision of the long term desired future. 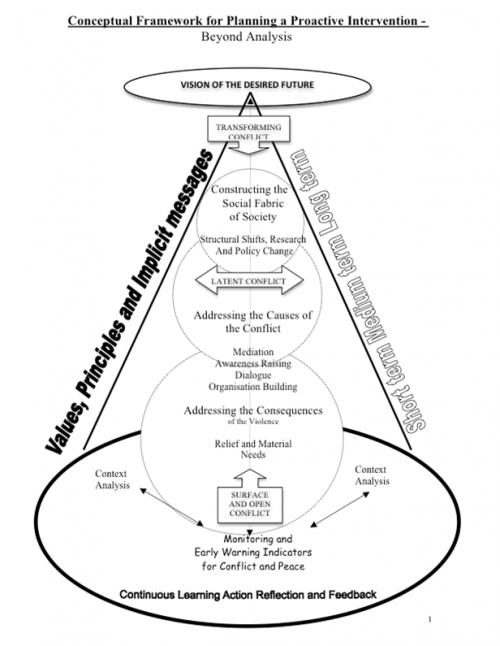