"PISTES"... in order to transform the feeling of powerlessness and the violence within a conflict

The ‘non-violent’ resistance of the famers in Larzac [1] to the extension of the military camp there [2] lasted 10 years, from 1971 to 1981. It ended with the abandonment of the project by the State with the election of a new president of the French Republic. It had international echoes and lead to a number of changes in thinking, an increase in the number of farmers (+ 20%) and a renewal of the social fabric by the arrival of craftspeople and people looking for a better quality of life [3].

It continues to inspire many forms of resistance against GMOs, against the appropriation of lands by multinationals and the oppression of indigenous populations in countries of the Global South.

In order to fight the buying up of land by the State as part of the expansion project [4] the farmers of Larzac created in 1973 some Groupements Fonciers Agricoles  [5] (GFA) which are groups holding collective ownerships of agricultural lands: more than 3 500 people bought ‘shares’ of the GFAs (150 €). These GFAs (four in all) exist still, and allowed collective management of the land (1000 hect.) [6] to which was added the land purchased by the State for the expansions project and subsequently and returned to agriculture in 1985 in the form of the Société Civile des Terres du Larzac (6000 hect.) [7]. The control and use of the land was an essential part of the resistance of the farmers of Larzac, and it is why the internal conflict which developed there was an important historical moment.

We are now in 1989, 8 years after ‘victory’. For a few years now one of the leaders of the farmers (‘traditionalist’) has been requesting the dissolution of the GFA in Larzac and resale of the lands acquired, as many of those that brought their land into the collective are calling for the return of their lands. Another leader (‘modernist’) refuses this option and wants to continue the existence of the GFAs to protect new or old holdings. There is between the two leaders an old animosity, which will crystallize around this conflict. Several attempts at ‘conciliation’ failed: two clans slowly form around the two leaders, each blaming the other for the failure of the attempted conciliations. The clan around the second leader then makes it know that they intend to go to court in order to obtain the return of the files of the contributors of the land that are being kept by the second clan: a petition is taken around the plateau to this end, in order to denounce the action of the first clan and justify this court action.

A resident of Larzac who has been involved in the struggle of the farmers for many years, and who knows the background of the problem that led to the confrontation of the two ‘clans’ and who has the trust of nearly all the actors in this conflict was then asked to sign the petition: he refused this dual opposition, but promised to act in a different way. For him, this court action as a result of a difference of opinion would be a total failure: for 10 years all these people were able to stay united and resist the State, despite several times being victim of ‘external guarantor, actually partisan’ justice who backed the process of expropriation for 8 years, and even sent them to prison! Taking for example M. K. Gandhi and C. Chavez, he decided to go on hunger strike for an indeterminate length of time. On the advice of their parties, exterior to the conflict he first went to meet both the leaders, individually, with whom he is on good terms, and informs them of his aims. Then he informed by post all of the protagonists of the reasons for his actions just before starting his strike in order to encourage them to ‘find a path of mediation’. On the third day the two clans accepted choosing five ‘representatives’ exterior to their clan. One of them was chosen by both clans, and whilst two more chosen by each clan are categorically refused by the other. On the fifth day the two clans refuse all compromises: the hunger strike continues.

At the end of eight days, two farmers who remained ‘neutral’ (son of one of the leaders and one friend of the other), who both have strong bonds of friendship with the resident, get involved by denouncing the deadlock, and asking the two leaders to accept, without conditions all the representatives proposed by the other clan. The leaders finally accept this measure, and the hunger strike was able to come to an end. All the managers of the GFA from both clans resigned in order to allow the representatives to work in peace with the files. Some of these representatives (including those whose legitimacy was questioned at the start of the process) put their trust in the process that has been started and withdraw from it. After six months this ‘mediating’ group suggests a consensual approach which is accepted by all the protagonists: an objective enquiry was carried out amongst all the contributors of land in order to understand their needs, a repayment plan spread over several years was created. All are winners in this process: the continuity of the GFA is guaranteed, the contributors who want a refund for their land will be paid within an acceptable time limit! The animosity between the two leaders remained unresolved. 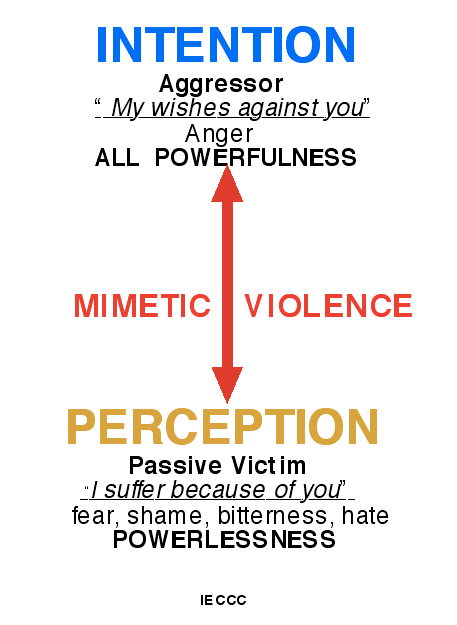 The two ‘clans’ are in a position of duality, alternating between ‘victim’ and ‘aggressor’:

The first clan ‘partisan’ of the land contributors who are ‘victim’ (‘numerous’ according to him, without providing evidence to back this up) judges the other clan and projects the alleged intent of despoiling the land on to the second leader, designating him as the ‘aggressor’ of the dissolution of the GFA.

The second clan, ‘partisan’ of the farmers who are tenants of the GFA (victim) refuse to accept this hypothesis (aggressor) and accuse the first of exaggerating the numbers of contributors of land who are claiming repayment (alleged intent- victim) and of monopolising the records. 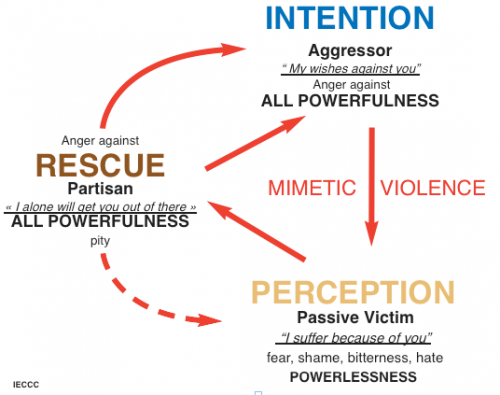 Each clan proposes conciliation through nominating their own conciliators (external guarantors) whom are however perceived as ‘partisan’ by the other clan. 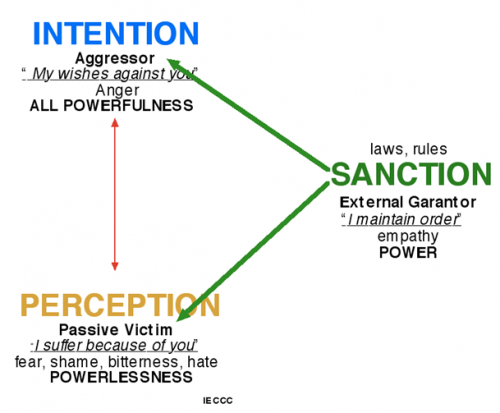 The second clan (victim) plans to call on the justice system (calling on an external guarantor, Sanction) in order to obtain the return of the records of the GFAs, which are jealously guarded by the first clan.

The second clan (victim) circulates a petition to people (‘partisan’) who are in neither clan, in order to denounce the refusal of the first clan (aggressor) to return the records/fichiers . 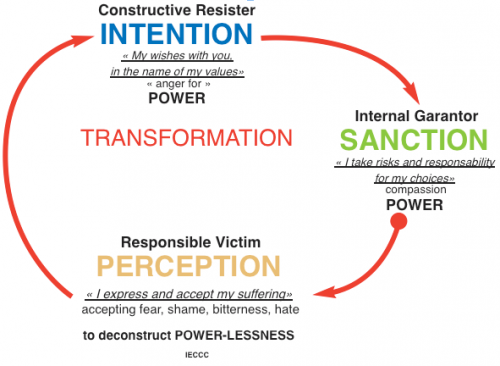 The resident in question is therefore approached as a ‘partisan’ by one of the clans against the other. Due to the knowledge of the hidden as well as the public issues of the conflict, he refuses the role of ‘partisan’ (Rescue) and takes upon himself, through the hunger strike (Perception, responsible victim) to convince both clans to stop trying to impose their unilateral approach on the other party (Intention – ‘aggressor’/Perception – ‘victim’) and to find a ‘path of mediation’ (Intention/resistance).

Through hunger strike he wants to emerge from his position of powerlessness (Perception ‘responsible victim’). In this way he expresses his suffering in the face of the deadlock in dialogue, dialogue that was able for 10 years of resistance to find consensus and preserve the unity of the movement. In this way he wishes to ‘convince’ the clans to find a compromise (Intention – resistance) whilst remaining neutral on what the compromise should be, as he is convinced that once the conflict of identity between the leaders has been taken out of the equation, the conflict will be returned to its proper form, in which compromise is possible (‘interior guarantor’).

On the third day of the hunger strike, the two sides finally accept the idea that they can nominate five representatives each, who will be responsible for creating a compromise. Each clan contests the legitimacy of one of the representatives of the other clan. 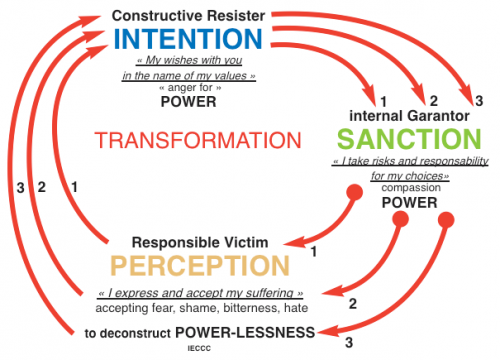 Despite several attempts (‘responsible victim’ and ‘resistance’) of discussions on an individual or group level the process is still blocked on the fifth day: each clan maintains their position.

At this point the lack of food must be accepted (‘responsible victim’) and trust put in the impact of the hunger strike on the protagonists and on the ‘neutral’ observers, giving them the time to free themselves from their position (‘resistance’) and to stay in the position of ‘internal guarantor’ who has to facilitate the Transformation of the conflict.

It is only indirectly that the hunger strike influenced the final transformation: it brought about the mobilisation of the ‘observer’ farmers (friend and son of the two leaders) who had up until that time remained exterior to the conflict. They made their own progression through PISTES by showing their anxiety (Perception/ ‘responsible victim’) for the health of the hunger striker, and aware of the deadlock to which this ‘combat of the chiefs’ was leading (Intention/resistance), they called on their values and took the risk (‘internal guarantors’) of being perceived as ‘traitors’ by their friend and father. The latter, finally emotionally affected by this intervention, accept the importance of leaving their mirrored imprisonment (of ‘victim’ and ‘aggressor’) and find themselves as a result in a position of Sanction, as ‘external guarantors’ to bring an end to the impasse, and to gain the agreement of their respective clans.

One could hope that the two leaders would carry out their own progression through PISTES to bring peace to their relationship. The first came to pay his respects to the second in his coffin a few years later. Maybe they achieved this in secret within themselves.

[1] Sheep farmers whose milk is used in the manufacture of Roquefort cheese (in the south-west of France).

[2] The creation of this camp in 1920 on 3000 hectares also was done through the expropriation of lands. In the 60s 30.000 hectares of land were rented to the British and German armies for training, which resulted in extensive damage to the land. At the same time the State created a military camp of 40, 000 hectares in the South-East of France (Canjuers) without meeting any resistance.

[3] This struggle was very inventive in its methods of resistance: cf. http://www.larzac.org/resister/histoire.html

[4] The State was only able to acquire 40% of the lands they wanted, which represents a huge failure in this kind of procedure!

[5] GFA: collective ownership of lands – in order to strengthen the farmers threatened by the land speculation – by the investment of private capital, in this case by activists.