The four steps to power of the dominated

This tool was designed for use in situations of conflict of interest that are strongly asymmetrical in terms of power. It describes the necessary processes to construct the conditions for negotiation between two very unequal parties. It is a process that makes it possible to achieve a fair conciliation of interest between parties in order to ease conflict.

The Four-Stepped Staircase is used by ReAct in socio-economic conflicts between subsidiaries of multinational businesses and neighboring populations. In general, the source of conflict has to do with the use of arable land or the redistribution of goods produced by these lands. Developed in this particular type of context, it can be used in all conflicts wherein a dominant, homogenous actor opposes a group of disorganized people whose interests are being overrun. 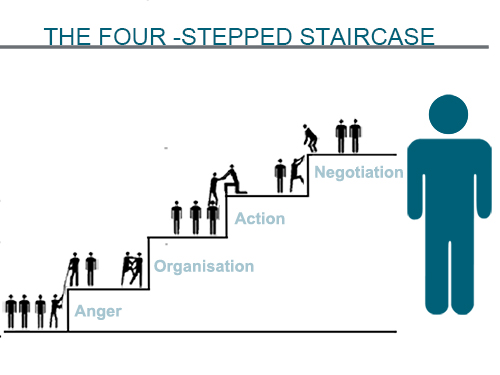 The image of the Four-Stepped Staircase is a tool that serves leaders of social groups whose interests have been pushed aside. It is first and foremost an educational diagram used by local leaders to promote to their communities the pressing need for collective organization and strategy to defend their interests through negotiation. As such it was designed less as a tool for retrospective analysis of a conflict situation than as a way of summarizing a strategic approach for the actors from the dominated side of the conflict.

In an asymmetrical socio-economic conflict, the Four-Stepped Staircase is a method of conflict resolution that offers an alternative to the methods seen in the diagram below and which end in deadlock.

The Four-Stepped Staircase is therefore designed to be a third path that can compensate for the limits of the deadlocks: 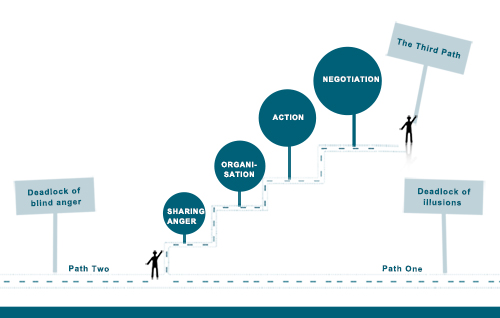 It is the combination of the staircase and the two impasses that constitutes a model for the analysis of conflict between businesses and populations. It allows us to identify the more or less conscious strategies of leaders attempting to defend the interests of their communities. It is prescriptive in the sense that it promotes the third path as a mode of conflict resolution in favor of the dominated parties.